Alexanders Smyrnium olusatrum is one of the earliest plants to flower, but the timing really depends on the weather.  This year, spring seems to be here now in February.  In other years, this plant has not started flowering until much later.  Last spring, the Beast from the East damaged a lot of plants, though those that did survive the cold managed to flower later.

It is thought that this plant was introduced to Britain by the Romans, though it in some areas it apparently arrived in Medieval times.  It was known as the Pot-herb of Alexandria, and grown in sheltered places around monasteries and the coast – areas less prone to frost than inland sites.  Every part of the plant is edible – think of celery stalks, salad leaves, cauliflower heads, asparagus stems, spices, and root vegetables all rolled into a single plant.

It is an umbellifer, easily recognised by its yellowish flower-heads and large expanded leaf bases (Angelica also has similar leaf bases, but blooms much later, and the flowers are white).

Alexanders is attractive to insects, providing an early season source of nectar, so there are likely to be things to record as well as the plant itself.  This is a male yellow-legged bee – one of the many solitary bees that need a good bit of practice to ID.  the large picture above also has a yellow dung fly on the flower-head.

An easier thing to identify is Puccinia smyrnii – a rust fungus that is only found on Alexanders.  Just look for the yellow/orange pustules on the leaves and stems.  Take a photo, and upload it to an on-line recording system 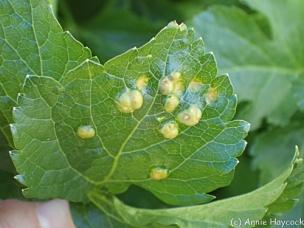 Record your sightings of this plant (and any other species you can see around you – try for a minimum of five) on the West Wales Biodiversity Information Centre recording system (if you are in West Wales) or on iRecord.

Other easy-to-ID species seen in early February in Pembrokeshire

You don’t have to be an expert to record wildlife.  If you can identify only one or two things, you can still record them.

The aim of this website is to show you some of the easy-to-ID plants and animals that can be seen in West Wales in each month.

When you have seen one thing, stop and look around and see if you can find four more.  Take a few photos – useful to confirm what you’ve seen.  This post gives an example

Then go to the West Wales Biodiversity Information Centre website to log what you’ve seen.  Or download the app from the website and do all the recording directly while you are out in the field.

And that’s all there is to it.  Just go out and look